skip to main | skip to sidebar

Some breakfasts are so good that even the crappiest world cup final in history cannot ruin them. 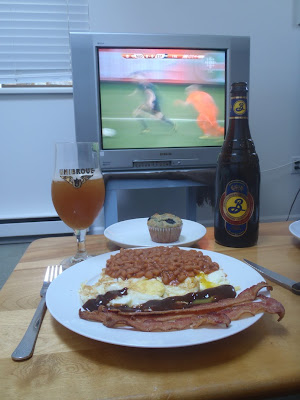 Brooklyn's "Brooklyner-Schneider" Hopfen-Weisse is a wonderful beer. It is a "concept" beer that actually works. Story goes like this: Brewmasters Garrett Oliver (Brooklyn) and Hans Peter Drexler (Schneider, a.k.a. Private Weissbierbrauerei G. Schneider & Sohn GmbH) are friends. Oliver loves Schneider's Weisse beer, and Drexler loves Brooklyn's East India IPA. They decided to combine the recipes, with each brewer creating a version of the concoction in the other brewer's brewery. Sounds to me like a sordid plan to write off a drunken holiday as a tax-refundable business expense. Kudos.

The resulting brew (Brooklyn version — I doubt I could get  hold of the Schneider version) is a 8.8% wheat beer with the hop profile of a double IPA. It smells like a banana milkshake laced with pine sap. The taste is incredible. The zingy edge of the wheat beer style is utterly corrupted by the hops and also by the black-spice flavours resulting from the beer's imperial treatment. As you expect from imperial wheat beers, there is a dry fruitiness and some soured-pear sweetness, which give the beer a big and complicated body. And that's before you factor in the thick and sticky soup of hops which — outrageously — sits in the balance just right.

Surely one of the only beers that could compete with a HP sauce-laden English breakfast without falling apart.

Misguided opinions about the world's best drink, with focus on Victoria & British Columbia

BEER
from: Love is A Mad Dog From Hell

the female is durable
she lives seven and one half years longer
than the male, and she drinks very little beer
because she knows its bad for the figure.

well, there's beer
sacks and sacks of empty beer bottles
and when you pick one up
the bottle fall through the wet bottom
of the paper sack
rolling
clanking
spilling gray wet ash
and stale beer,
or the sacks fall over at 4 a.m.
in the morning
making the only sound in your life.

beer
rivers and seas of beer
the radio singing love songs
as the phone remains silent
and the walls stand
straight up and down
and beer is all there is.