skip to main | skip to sidebar

I didn't want this to turn into a food and beer blog so I've been holding back on writing about the pairings I've been experimenting with. But I accidentally invented the best beer snack known to man and I have to share.

Recently I was invited to a beer and food pairing event held at the Liquor Plus branch on Douglas Street. It was the first pairing event I'd been to and I'm excited to attend and perhaps even host some more. Left4Beer designed a menu and attendees had to bring a specific snack or beer. By the time I got my act together, there were only a few options left. I chose to bring devilled eggs.

Having never made them before, I did a bit of research on egg recipes and discovered that scotch eggs — a childhood favourite of mine — are not that hard to make. I really wanted to make scotch eggs, but the brief was for devilled, so I decided to combine the recipes and called it "Scottish Devils". 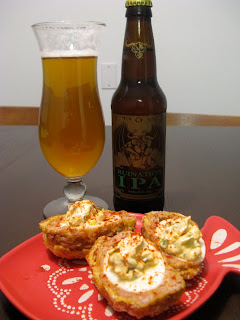 The eggs were partnered with Howe Sound's King Heffy, which is a total triumph of an imperial hefeweizen from one of BC's best craft brewers. They went down well with the beer guys.  I neglected to take my camera and felt like I could improve on them a little, so I recreated them at home later in the week. Here they are, partnered with a Stone Ruination IPA. I gave the recipe a good kick of heat and garlic which is ideal with a powerful IPA like the Stone beer.

Directions
Hard boil and peel the eggs (5 minutes is enough). Split sausages open and mix well in a bowl with the cumin, garlic powder, cayenne, thyme and pepper. Divide mixture into four, wet hands to prevent sticking, and mold each portion around a peeled egg. One sausage per egg provides perfect cover. Dip each egg into flour, then beaten egg, then breadcrumbs. Bake in a buttered oven dish at 350f for 30 minutes. Remove when done and leave to rest for ten mins. Halve each egg (be careful, the coating can split, so use a very sharp knife). Gently ease out each yolk with a teaspoon and put in a bowl. Add all the devilled ingredients apart from the mayonnaise and smoked paprika. Then add the mayonnaise and stir well until the texture is creamy and easy to spoon. Spoon a blob into each egg cavity, sprinkle paprika over the top, and serve. The version below was a second batch. I followed the same recipe, but drizzled tabasco, chinese pepper/garlic sauce and some more chili powder over the top. 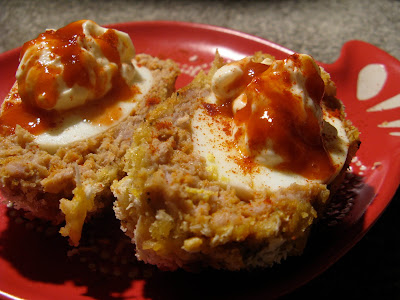 Misguided opinions about the world's best drink, with focus on Victoria & British Columbia

BEER
from: Love is A Mad Dog From Hell

the female is durable
she lives seven and one half years longer
than the male, and she drinks very little beer
because she knows its bad for the figure.

well, there's beer
sacks and sacks of empty beer bottles
and when you pick one up
the bottle fall through the wet bottom
of the paper sack
rolling
clanking
spilling gray wet ash
and stale beer,
or the sacks fall over at 4 a.m.
in the morning
making the only sound in your life.

beer
rivers and seas of beer
the radio singing love songs
as the phone remains silent
and the walls stand
straight up and down
and beer is all there is.